When you experience trauma, you undergo specific biological changes in both your brain and physical body.

Understanding your brain can help explain the implications of trauma.

The brain is the most fascinating part of the human body, capable of more than we can begin to fathom. When faced with a stressful situation our brain acts in ways to help us get through it, and then heal afterwards. In order to understand what goes on in your mind when you are faced with trauma, it is helpful to understand some basic areas of the brain that are involved in this very complex process.

The brain is composed of three basic parts - the cerebrum, the cerebellum, and the brainstem. The cerebrum is the largest part of the brain, composed of the right and left hemispheres. All higher functions are performed in this area, including interpreting touch, hearing and vision, speech, emotions, learning, and fine motor control. The cerebellum is located underneath the cerebrum, and coordinates muscle movements, balance and posture. Finally, the brain stem acts as a relay center connecting the cerebrum and cerebellum to the spinal cord.

Within the cerebrum is the frontal lobe, which is primarily responsible for our personalities, emotions, and behaviors. It is also responsible for judgement, problem solving, speaking and writing, and our general self awareness. 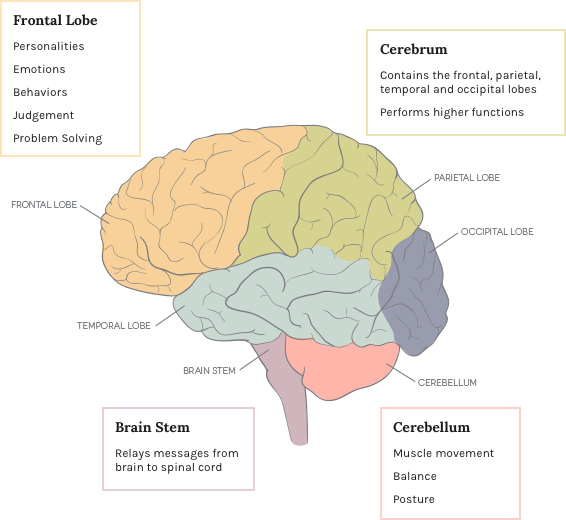 Deep within our brains, lie structures that help translate signals from broader parts of our brain. The main structure is the limbic system, which contains the hypothalamus, amygdala, and hippocampus. The limbic system is the center of our emotions, learning ability, and memory. The amygdala in particular is responsible for our fear response and other emotional reactions, whereas the hippocampus is responsible for memory. The hypothalamus regulates our emotions and secretion of hormones. Signals are sent from the hypothalamus to signal the secretion of hormones to our body, allowing us to respond to certain situations.

Our body prepares responds to traumatic situations by releasing a flow of chemicals.

When we are exposed to a traumatic situation, we first perceive it with our senses: sight, sound, touch, etc. This information is then transmitted to the brain to be processed, specifically an area called the thalamus, and then to the prefrontal cortex and amygdala.

The amygdalae are activated by any threat, labeling it as fear and signaling an “alarm” to the rest of the body. This starts in motion the “fight or flight” response, transmitting information to four other body systems. First, a signal is transmitted to the hippocampus, warning it of danger, and making you able to put words to the situation, thus creating a memory. From the hippocampus, this information is sent to the prefrontal cortex, where the overall experience is evaluated in comparison to everything you have experienced in the past.

The sympathetic nervous system is also activated by the release of adrenaline. Adrenaline instructs all of your body’s organs to prepare for danger. This sends energy to the places you need it most, such as your breathing, muscles, etc. and shuts down areas of your body that you will not need, such as your digestive system. By doing this, your body is ready to do what is needed to help protect yourself or run away. 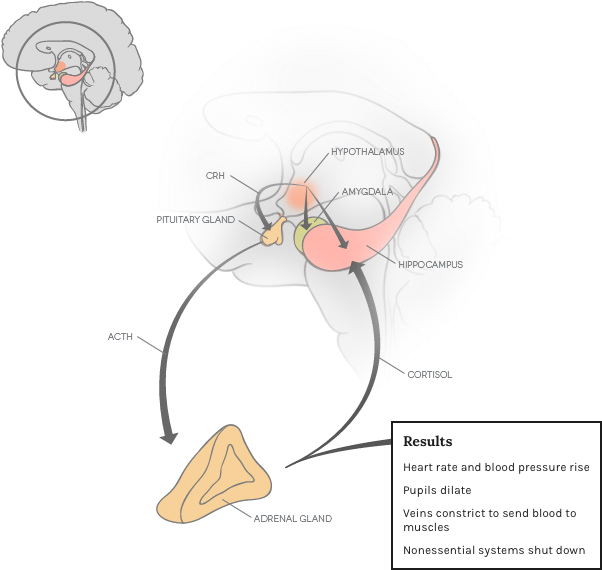 The major areas of your brain that trauma affects

Information also reaches an area of the brain called the hypothalamus, which signals the secretion of various hormones. One in particular, cortisol, is released to ensure enough energy to deal with a stressful situation.

How Stress Affects Your Mind

What you are experiencing is due to a series of biological factors.

After experiencing a traumatic situation, many people are often left in the months after wondering if their behavior and the emotions they are going through are crazy. But what most people don’t know is that the stress of trauma can actually cause neurological changes in your brain, which gives a scientific reason for a lot of the feelings and behavior you may see after a trauma. A lot of this is caused when our body goes into “fight or flight” mode, but any sort of stress has an affect on our brains as well.

The main chemical released during any type of stress, particularly traumatic stress, is cortisol, which has many adverse effects on your brain and body. Stress responses are not always bad, as they help us act accordingly in harmful situations. It is when your body experiences prolonged stress and release of chemicals that it can be harmful to you. The specific areas of the brain that are used in the fight or flight response, discussed earlier, are responsible for certain reactions you may have after trauma.

The prefrontal lobe is responsible for language, which is maybe why after a traumatic experience, it is often difficult for people to express their thoughts and emotions. The amygdala, which signals fear to your body, goes into overdrive with the release of cortisol, making it difficult to control your emotions or regulate them like you would have before the trauma.

Many people often have problems with memory afterwards, which is due to the hippocampus being affected by cortisol. The hippocampus is responsible for converting short-term memories into long-term memories, so by damaging it, it impairs normal memory function. This is also the reason why some memories of traumatic events are not able to be recalled all together.

The prefrontal cortex, responsible for regulating emotion and fear, has a hard time functioning properly, which may explain the constant feeling of terror or anxiety.

Understanding that what you are experiencing after a traumatic experience actually does have a biological reason, should help you to know that you cannot control what you are going through. This explains why you cannot simply “get over it”. It takes time and a lot of hard work to regain your full mental and emotional stability, but it is very possible.

How Stress Affects Your Body

Just as traumatic stress plays a role in your emotions, it also affects your physical being.

The symptoms you may feel after experiencing trauma and grief are not simply just mental, they are also physical. The stress your body is under can manifest itself into physical pain. This can include anything from headaches, aches and pains elsewhere, fatigue, muscle tension, nausea, and other physical symptoms.

Much like your brain, your body is also experiencing a great deal of stress, and as this tension builds it shows in all areas, not just your emotional state. Cortisol, the primary stress hormone, inhibits many functions during the “fight or flight response”, such as suppressing the digestive tract and immune system, so that you can respond quickly to the situation. As a result, this can leave you more susceptible to illness or an upset stomach.

Another primary chemical released during a traumatic situation is adrenaline, which results in an increased heart rate and blood pressure to supply your body with the energy it needs to get you through the trauma. By doing this, it cuts off blood supply to the skin, which, after long periods of time can manifest itself as acne or hair loss. Stress can also have an effect on sex hormones, which inhibits sexual desire or may disturb a woman’s menstrual cycle. 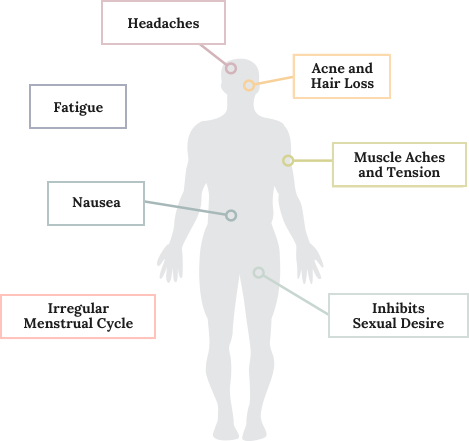