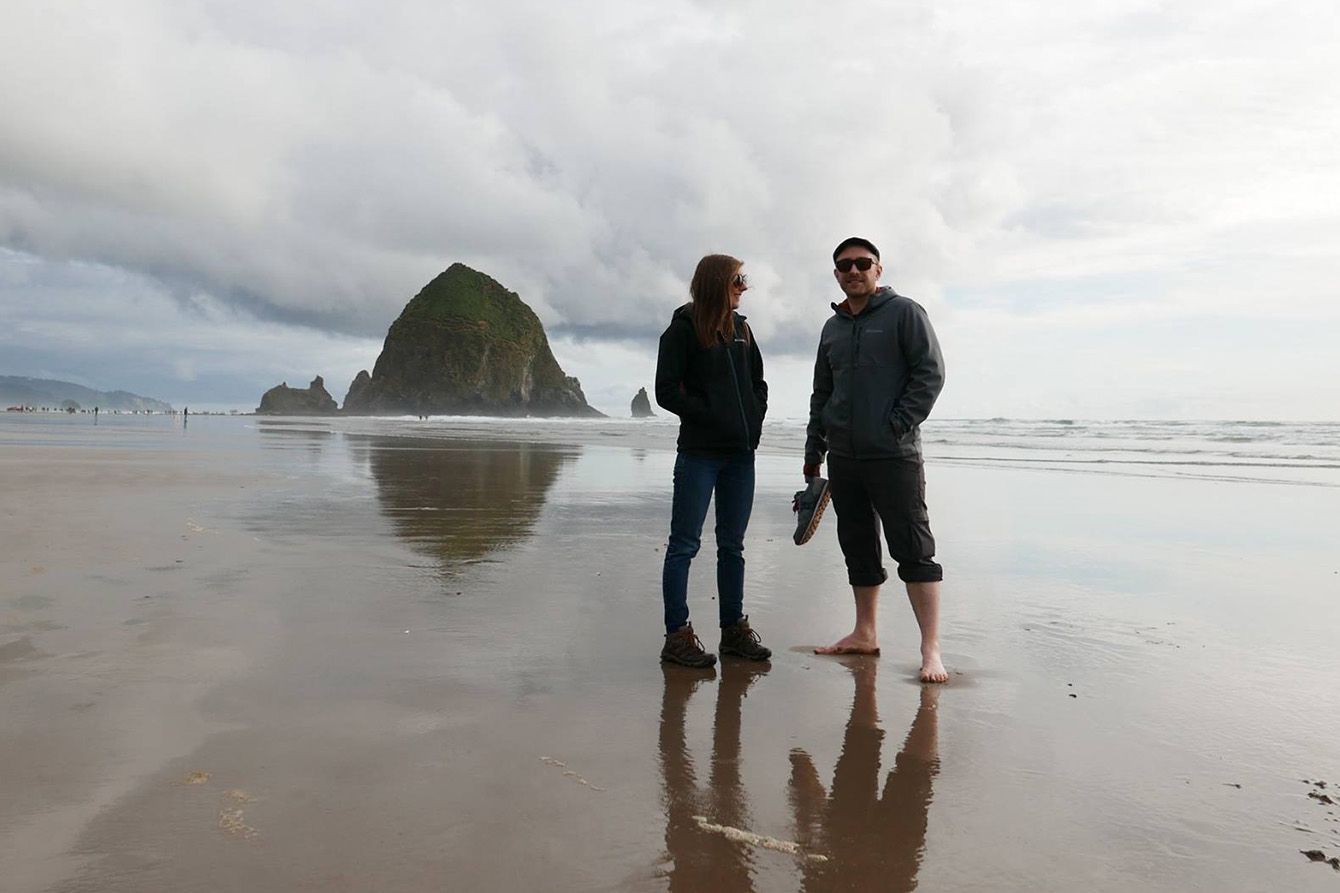 "I really don’t consider it a tragedy as much as a life event and I am glad to have come out on this side.”

In the fall of 2011 I began having an odd dull pain in my stomach. This pain slowly developed into a pain that had me doubled over by mid-December, making me believe that I had a stomach ulcer.

I finally went to visit the doctor and had an x-ray scheduled of my abdomen. I went for the x-rays the next day, and I waited while the radiologists reviewed the images with my doctor. They requested additional scans while I was there.

After reviewing the images, the doctor asked that I bring my family with me for an appointment. It was an all too familiar doctors office that my pediatrician had occupied previously. I can't recall any specific words the doctor used that day, but I won't forget the looks on my parent’s faces as the doctor described to us what those blurry white spots meant on my xray. I likely had late stage testicular cancer. It had grown a tumor behind my stomach rather than a more visible place where it could have been easily noticed.

The following day I had the appointment with an oncologist. After reviewing the images, I was scheduled to have "lefty" removed the next day. The biopsy and scans indicated I had stage 3 testicular cancer that had developed a tumor in my abdomen the size of a baseball, and the cancer had metastasized to my liver and lungs.

The day following the surgery, I began chemotherapy. It was going to be inpatient the first week at Cleveland Clinic.

It had been 3 days from when I went to the physician with stomach pain, to having had surgery and 3 months of fairly aggressive chemotherapy scheduled.

Over the following three months, I lost weight, my hair, and my energy among other things. I finished the scheduled chemotherapy at the Cleveland Clinic and was beginning to plan the removal of all the remaining metastasized tumors in my abdomen, lungs, and liver. This was going to take multiple surgeries, remove a portion of my liver, and a considerable volume of my lungs.

Four days before I was scheduled to have the first of the surgeries, I received a phone call that I would not be having the procedures. A blood test came back indicating there was still a significant amount of active cancer in my body. The surgeries were cancelled.

A decision was made to pursue high-dose chemotherapy out of my home state, at Indianapolis University, for 2 and a half months. I would be living out of a glorified hotel suite in Indianapolis. Luckily, both my parents were able to pull some strings, and I had both of them with me for those couple months.

High-dose chemo is much different than the previous regimen I had undergone. I had to have stem cell collection from my own bone marrow before treatment, and was in the hospital 7 days a week for 6-8hrs a day once the treatment began.

I lost all the hair on my body, save my eyelashes and a couple eyebrow hairs. I slept around eighteen hours a day. I received blood transfusions when needed, stem cell transfusions twice, and took an amazing number of pills every day. I had to wear a surgical mask in public due to my compromised immune system.

As the days in Indianapolis were coming to a close, the tumor markers for active cancer had fallen to near normal levels.

I moved back home and followed up with low-dose oral chemotherapy.

Since December of 2012, the tumor markers and scans have shown no active cancer. The tumor sites are believed to be only scar tissue that is slowly disappearing and there is no surgery planned at this time.

The last year and a half has been a blur.

I was in disbelief and shock. I thought I had a stomach ulcer from spicy food and taking too much Tylenol made it worse. I had very little time to internalize what was actually happening while I was getting mentally prepared for a surgery, thinking about my work situation, scheduling chemotherapy, considering where I was going to live, and how I was going to get around. It kept my mind very busy and distracted from thinking about the very obvious looming question, the 800lb gorilla in my head.

I tried to keep myself busy and keep my mind in positive places.

At first tried to shovel blame onto some environmental, or genetic cause. As I soon found, there was no scientifically reputable direct correlation for my type of cancer. It was disheartening and disorienting to not know the answer to “Why did this happen?”.

I found myself very frustrated at times, but it came from a place of self-pity and helplessness. Those were the largest obstacles for me to overcome early on. For me, the self-pity was a reprehensible feeling. I had to come to terms with my current situation. I tried not to look at statistics related to cancer and survival rates related to my disease.

My family and friends were there during my first week of inpatient chemotherapy at the Cleveland Clinic. I can’t imagine going through that first week without their support.

Where I Am Now

I dealt with the initial trauma mostly by explaining my situation to my friends. It helped me to talk about it, and get it out in the open. I needed some type of outlet to talk about my situation with people that were close to me. I couldn’t seem to find the interest in sharing with the social worker at the Cleveland Clinic, but I had no problem with talking about it to my friends.

I tried to keep myself occupied with anything from video chatting with friends, sending emails, watching movies, watching entire seasons of TV series, playing video games, reading books, and going to the gym when I could gather the energy.

One of the most important things to me and my family while I was going through treatment was company of others and just conversation. It really didn’t matter too much about what, but the fact that there were people to talk to while I was in the hospital for hours on end was refreshing. For me, company helped divert my families attention. My family was coping with my cancer in their own ways, and they needed to talk and get their minds off waiting for the next set of test results as much as I did. It was a great relief when people would come to visit even if it was a nurse taking ten minutes to chat with my parents.

The nurses were amazing, period. They were so knowledgeable and attentive, it relieved a great deal of stress when you can ask someone a question and you trust their answer will be honest and from a place of experience.

One of the most unexpected and extremely important things was the support I received from my co-workers. I received support in so many ways from them. Luckily, the office where I worked (and still do) and the Cleveland Clinic are five minutes from one another. My co-workers came to visit me during chemotherapy, we met for lunch while I took months off work.

One co-worker, Tessa, on occasion would bring lunch for my family if they were with me during treatment and visited often. She later paired with the president of our company to throw me a party for finishing treatment and celebrating my better health. The party, turned into a concert, and the concert turned into a benefit. There was a stage, bands, food trucks, raffles, and a local sketch comedy group performing. Myself and a co-worker’s wife would be the beneficiaries. I was blown away. There were twenty or so volunteers and the Foundation for Community Betterment hosted the event, dubbed Ripple Fest. I am still awestruck that people have dedicated themselves so wholeheartedly to helping people. Needless to say, I will be volunteering next year.

I am still very much at the beginning of recovery. Each time I am scheduled to have more bloodwork done, I still have anxiety for the week leading up to the appointment. Everyday I think I am taking a step forward. It seems like such a great deal of my life is defined by my health in the last year and a half. I really don’t consider it a tragedy as much as a life event and I am glad to have come out on this side.

I am still just understanding what it means to be a cancer survivor, and how it is changing my life. I am dealing with anxiety as it comes, and try not to worry about those things that are outside my control. I have been accepting more responsibility for my own health, and I feel like that is part of my healing process.